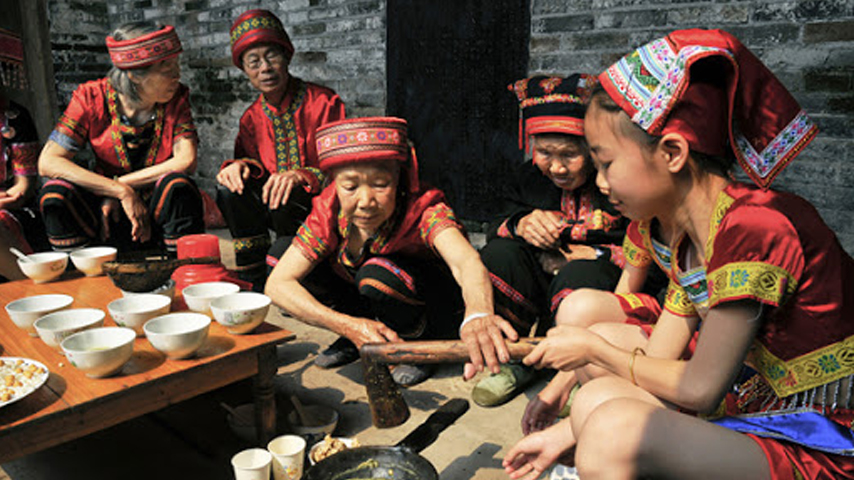 Also known as Chinese coffee in Guangxi, the unique variety of tea has gained popularity among Yao people as it can improve digestion, among other health benefits.

In 2008, Gongcheng oil tea was listed as an Intangible Cultural Heritage of Guangxi. Meanwhile, it set a Guinness World Record in 2019 after 2,019 people made oil tea simultaneously.

"A cup of oil tea marks the start of our day, and we have it every day," said Lu, adding that oil tea is an important cultural symbol of the county and it is the essence of the local Yao food culture.

Several steps are involved in the preparation of this special tea, including washing, frying, pounding and boiling, among which pounding is the essence.

Ou Xinjie, the owner of an oil tea restaurant, said the sales of oil tea are improving and more than 1,000 people come to drink the tea in his restaurant every day.

"We are going to make oil tea bags and sell them through e-commerce sites," said Ou.

In 2019, the sales revenue of the local oil tea industry reached 520 million yuan, with more than 3,400 jobs created.

"This is my first time to drink oil tea. Though it tasted a little bitter initially, I got used to it after drinking a few times. I love the ingredients," said Wang Yuan, a tourist from Sichuan Province.

"Oil tea is our county's claim to fame. As an oil tea inheritor, I'm happy to display oil tea culture to more visitors. I would like to welcome more people to Gongcheng for a cup of oil tea," said Lan Runping.