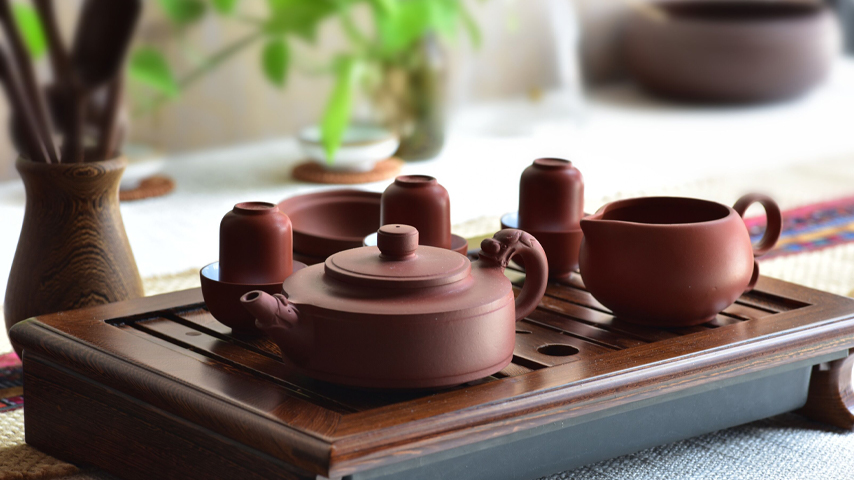 Gongfu cha, meaning "making tea with skill", is a popular method of tea ceremony in China. It makes use of small Yixing teapots holding about 100–150 ml (4 or 5 fl.oz.), the size being thought to enhance the aesthetics and to "round out" the taste of the tea being brewed. Small tea cups are being used along with Yixing teapots. Gongfu tea is best consumed after meal to help digestion. Brewing tea in a Yixing teapot can be done for private enjoyment as well as to welcome guests. Depending on the region of China, there may be differences in the steps of brewing as well as the tools used in the process. For example, Taiwanese-style gongfu cha makes use of several additional instruments including tweezers and a tea strainer. The procedure is mostly applicable to oolong teas, but it is some used to make pu'er and other fermented teas.

Attention to tea-making quality has been a classic Chinese tradition. All teas, loose tea, coarse tea, and powdered tea have long coexisted with the "imperially appointed compressed form". By the end of the 14th century, the more naturalistic "loose leaf" form had become a popular household product and by the Ming era, loose tea was put to imperial use. In Japan, tea production began in the 12th century following Chinese models, and eventually evolved into the Japanese tea ceremony, meant to be exclusive to political and military elites. The related teaware that is the tea pot and later the gaiwan lidded cup were evolved. It is believed that the gongfu tea preparation approach began only in around the 18th century. Some scholars think that it began in Wuyi in Fujian, where the production of oolong tea for export began; others believe that it was the people in Chaozhou in the Chaoshan area in Guangdong started this particular part of the tea culture.Senchaōin Japan started in the early Edo period influenced from China.

Oral history from the 1940s still referred to Gongfu Cha as "Chaoshan Gongfu Cha". It is likely that regardless of the earliest incidence of the approach, the place that first successfully integrated it into daily life was Chaoshan area. Chaozhou is recognized by some as the "Capital" of gongfu tea.