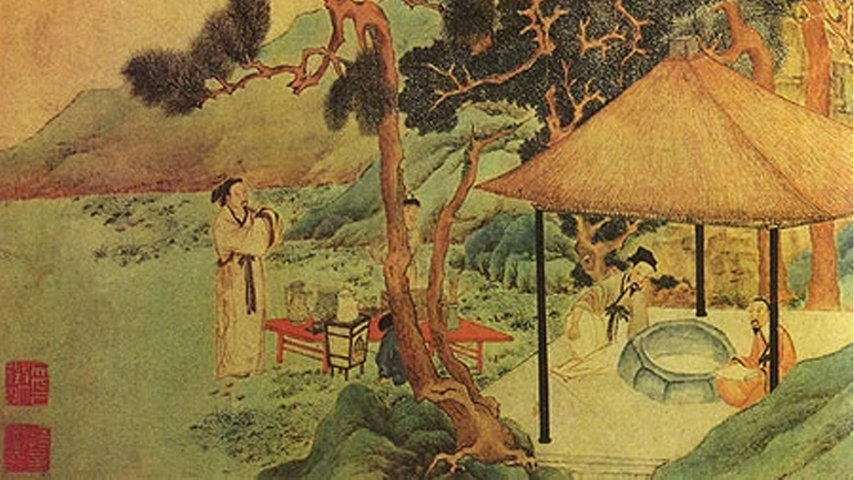 Huqiu and Tianchi tea During this time, Huqiu tea (Chinese: 虎丘茶), not to be confused with the black tea of the same name from the Nilgiris District in what is now Tamil Nadu, India) was purportedly developed as the finest tea in the world; however, the production quantity was rather small, and the production is regulated by the Chinese government. Some, however, consider its taste to be second to Tianchi tea (Chinese: 天池茶).

Jie tea Jie tea Chinese: 岕茶; pinyin: jiè chá from Changxing County in Zhejiang Province is regarded highly by connoisseurs, although it is rather expensive.

Luo Jie tea from Gu Chu Mountain in Changxing County in Zhejiang Province was also known as Gu Chu Violet Shoot. Gu Zhu Violet Shoot had been an imperial tribute tea since the Tang dynasty for nearly nine hundred years until the middle of the Qin dynasty. Gu Zhu Violet Shoot was revived again in the 1970s as a top grade tea in China.

Lu'an Melon Seed tea Lu'an tea (Chinese: 六安茶; pinyin: liù ān chá), which is also called Lu'an Melon Seed tea, is used for Chinese medicine. It cannot release its aroma and has a bitter taste if it is not baked right. The inherent quality of this tea is considered quite good. This type of tea is especially suitable for people who are suffering from gastric problems.

Lu'an tea is still produced in China, Anhui Province, China. The Lu'an tea from the Bat Cave of Jinzhai County is considered of superior quality, as thousand of bats in the cave can provide an ideal fertilizer for the tea plants.

Songluo tea Songluo tea is manufactured at Songluo Mountain located north of Xiuning County in Anhui Province, China. The tea plantations are scattered at an elevation of six to seven hundred meters on the mountain.

There is no real Songluo tea grown outside an area of a dozen mu (one mu = 667 square meters) and only few families possess the refined full to prepare Songluo tea. The tea hand-baked recently by mountain monks is even better.

Genuine Songluo tea is produced at the foot of the Dongshan (Cave Hill) and on top of the Tiānchí (Chinese: 天池; lit. "Heaven Pool"), highly treasured by people in Xin'an County. It is also a favorite for the people of Nandu and Quzong counties, due to its ease in brewing and intense aroma.

Longjing tea Longjing tea and Tianmu tea may match Heaven Pool tea due to the weather in their growing regions. Because the cold season comes earlier to the mountains, there is abundant snow in the winter, hence the tea plants germinate later.

Longjing tea is manufactured in the West Lake district of Hangzhou, China. The Longjing, literally "Dragon Well", is located at Fenghuang Mountain. Tianmu Mountain is located at Lin'an County in the north west of Zhejiang Province. There are two 1500-meter peaks, each with a pond on top filled with crystal clear water looking like an eye, hence the name Tiānmù (Chinese: 天目, lit. "heaven eye").