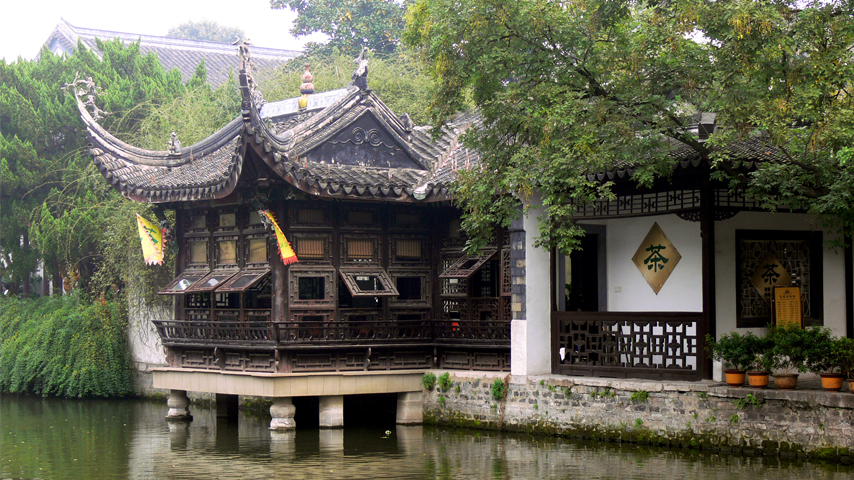 Chinese tea houses refer to the public place where people gathered to drink tea and spend their spare time. Chinese tea houses have a long history. It first took shape during the Tang dynasty Kaiyuan era and became common during the Song Dynasty. From the Ming and Qing dynasties, tea house culture became integral to regional culture.

Drinking morning tea is a custom within various provinces regardless of what status or identity people are. People often go to tea house in twos to threes to relax, be entertained, and gather information all while sipping tea. One could find old folks reminiscing over their joys and sorrows, or youth discussing their ambitions.

In 1970s, Chinese tea houses spread to Hong Kong. Some notable ones include “Yen Yen”, “Tsui Heung Yuen”, “Pak Cheuk”, “Yin Bun Lau”, and “Wun Tin”, among others. Merchants would use tea houses as a place for exchanging information and business. For example, a jade merchant might complete a transaction in a tea house.

Ba-Shu culture and Sichuan teahouses Sichuan teahouses have various sizes. The large ones have hundreds of seats, while the small ones, only a few. They also have excellent services. Traditional Sichuan teahouses use red copper teapots, tin saucers, teacups with covers made of Jingdezhen porcelain, tuocha- a bowl-shaped compressed tea leaves- and tearoom keepers expert at all manner of work. What's more, Sichuan teahouses have social functions. They play an important role in spreading the state affairs information. People can chat with each other there. They also serve as unofficial courts.

Wu-Yue culture and Hangzhou teahouses Wu-Yue area is famous for tea producing and green tea produced in Zhejiang province play a decisive role. In Hangzhou, most tearooms are elegant, simple and unsophisticated. They emphasize making tea with good-quality water and tasting tea in an excellent environment in order to achieve the true meaning of tea art.

Shanghai-Huxinting Tea House Tianjin teahouses, Shanghai Fuchaguan teahouses and Guangdong tearooms Most of the Tianjin teahouses meet the needs of business people from different parts of China. People of various trades drink tea while eating refreshments and appreciating performances which include singing of opera arias, storytelling and dagu (a versified story sung to the accompaniment of a small drum and other instruments).

In the past, Shanghai teahouses are regarded as learned and refined places in Shanghai. Shanghai people called teahouses fuchaguan to express their longing for leisure. The most typical teahouse with local features was situated in the old Chenghuangmiao area.

The old Guangdong tearooms were inexpensive. Regular customers would be served with a cup of tea, and two steamed buns stuffed with diced grilled pork, steamed dumplings with the dough gathered at the top, or dumplings with shrimp stuffing. However, teahouses become different now. Nowadays, customers are provided with a pot of strong tea as soon as they arrive, and have many choices from a great variety of refreshments on the food cart.