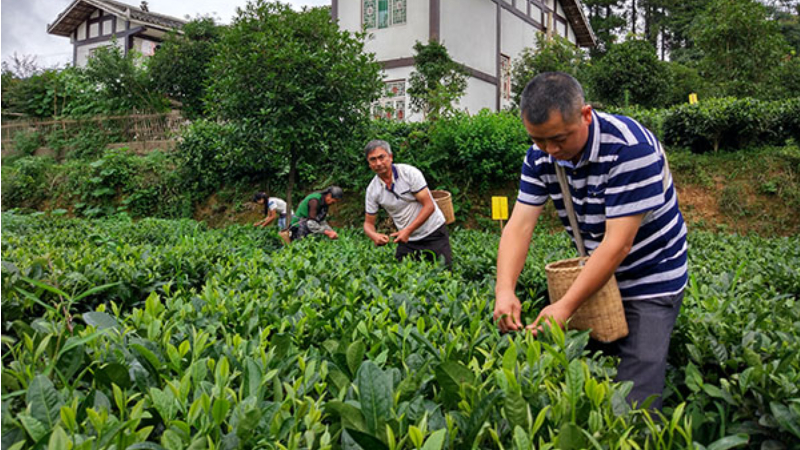 Meitan county in Guizhou province plans to tap the potential of carbon credits to help it boost its already booming eco-friendly tea sector, which local authorities see the capacity potential to absorb carbon dioxide from the atmosphere.

Located in northern Guizhou, about 66 percent of the county is covered by vegetation. Ten percent is accounted for by tea trees and 73 percent of its 500,000-strong population is engaged in growing the crop.

At the end of 2022, Meitan forest administration issued the first carbon credit certificate in the county to a 534-hectare tea plantation owned by State-owned company, Mingcheng, which translates as 'city of tea'.

Calculations show that the plantation has helped absorb greenhouse gases equivalent to 6,044 metric tons of carbon dioxide, according to Meitan authorities.

The issuing of the certificate is a result of the county's efforts to explore viable approaches to transform their "lucid waters and lush mountains" into invaluable assets, Song Linsong, an official with Meitan forest administration, was quoted as saying by Guizhou Daily.

As a market instrument, carbon credits can be sold to emitters to help offset their emissions. Some conference organizers, for example, will buy credits to offset the greenhouse gas emissions generated by the events they organize, and thus claim to hold carbon neutral meetings.

Tea plantations are a major source of income in Meitan.

In 2021, the county produced about 79,800 metric tons of tea valued at more than 6.7 billion yuan ($978 million) and growing tea contributed to half of the per capita disposable incomes of rural residents, according to local authorities.

Following consistent efforts to promote the development of the sector, the area planted with tea in the county has increased from 1,867 hectares in the 2001 to 40,000 hectares in 2021.

Unlike many other areas, Meitan has adopted an eco-friendly approach to grow tea. Instead of only planting tea, farmers interplant other cash crops, including sweet osmanthus and cherries, local authorities said.