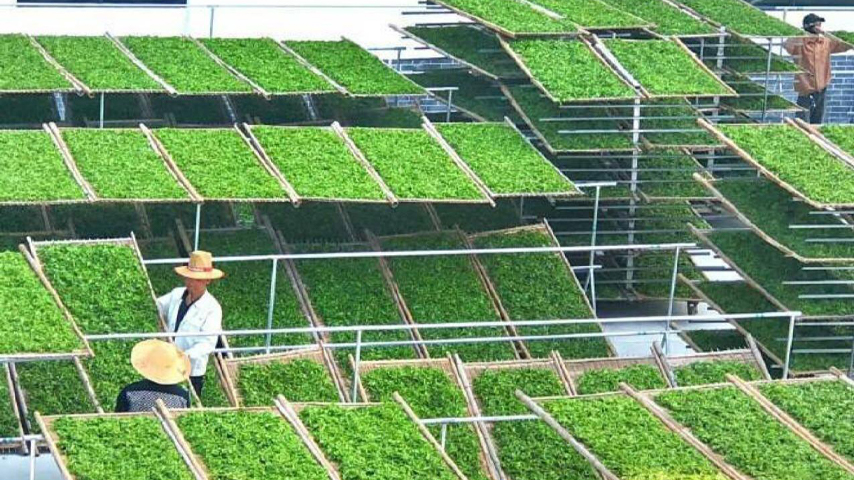 FUZHOU, April 13 (Xinhua) -- Having hopped from job to job across China since he was 15, Li Zhaotie finally became self-sufficient through white tea cultivation back in his hometown in the city of Fuding, east China's Fujian Province.

Li, 45, started growing white tea in 2011 and within five years he built himself a six-bedroom house using the incomes generated from selling the produce. He currently operates a 180-mu (12 hectares) tea farm in Fangjiashan Village, renowned for the unique variety of tea.

Over the past decade, white tea cultivation in Fuding has flourished into an industry worth over 10 billion yuan (about 1.53 billion U.S. dollars), with approximately two-thirds of the city's population engaged in it. The thriving industry has helped lift many people out of poverty.

White tea is deemed one of the six major types of tea in China and its processing involves simpler steps compared to the other varieties. Tender buds and sprouts are plucked in early spring, and then withered and dried to preserve their delicate and sweet flavor.

White tea was grown in Fuding as early as 1,000 years ago during the Tang Dynasty. In the late 18th century, tea growers in the city created Yinzhen, a distinguished variety of white tea. It was around that time the white tea was exported en masse to regions including Europe and Southeast Asia.

While white tea was met with rave reviews overseas, it once remained under the radar for many years, overshadowed by green tea, black tea and oolong tea.

"Fuding white tea is a dark horse in China's tea market," said Lin Youxi, founder of a renowned tea company in the city.

Once a technician for tea processing machinery, Lin sold tea harvested from Fuding in the 1990s when the company he worked for went under. Back then, he used to primarily deal in green tea and herbal tea.

Breakout for white tea in Fuding came in 2007 when a government-led group was set up for branding Fuding's white tea and nurturing the industry. The group helped local tea companies attend exhibitions and open up new markets.

It did not take long for Fuding's white tea to gain popularity. "Fuding White Tea" has been among the top 10 most valuable tea brands in China for 11 consecutive years, ranking fourth last year at an assessed brand value of over 4.97 billion yuan. Since 2010, white tea-growing started scaling up in Fuding, bringing locals like Li back to join in the business.

In 2020, Fuding produced 25,300 tonnes of white tea. Tea-related output is currently valued at 11.95 billion yuan, up 12.2 percent year on year despite the pandemic-induced impacts. Over half of Fuding's per capita rural disposable income comes from tea.

"There's no way a hard-working person can be poor here," said Zhang Longgui, head of Diantou Township in Fuding. Aside from growing tea themselves, farmers can expand their income by leasing their fields, working for tea companies, or holding shares in such companies, Zhang added.

While Fuding accounts for around half of white tea output nationwide, white tea currently takes up approximately 2 percent of total tea consumption in China, indicating room for future growth.

Amid competition from other white tea-growing areas, Fuding is beefing up efforts to make white tea healthier and greener. According to local officials, the city is exploring unified citywide pest control to lower chemical residuals, and has banned the use of herbicides.